For the past few years, I have been exploring the way light and color play upon and through trees. The raw, seemingly unfinished spaces in my work reveal a history of the painting or drawing, resembling the way you can look at a tree and see the growth patterns. The growth of the work itself is presented, as if it is still in the process of emerging.

My recent bodies of work, Microcosms of the Pacific Northwest and The New Zealand Bush, are made up of delicate, small scale drawings and prints of roots and branches that hint at the subject, while leaving large portions of the paper’s surface untouched. In these works, I have been experimenting with graphite, gouache, egg tempera, intaglio, and lithography as mediums that can be built up in layers of small marks. Each of the graphite drawings is done with a hard pencil that creates a light value range and allows me to almost carve into the paper in the darker areas of the image. The accumulation of marks in some areas, the blank page in others, and the shadows and indentations of the paper affected by the carved marks creates contrasts of surface and texture. Some of the untouched parts of the page hold the form, while other untouched areas become the negative space and background.

During my year in New Zealand, I started to break up the image and create works that were built up of smaller pieces of paper. The size and quantity of the small panels of paper references the relationship between the large scale of the tree and the intimate nature of studying it up close. Branches and roots are often interrupted as they travel across the different pieces of paper, jogging to the side, repeating, or omitted altogether. These works explore the feeling of standing in front of a tree that is too large to take in at once, as the wind moves the branches and leaves. The detail and atmospheric perspective is evenly distributed across the composition, as it would appear when you inspect individual aspects of the tree in real life.

Since returning to the United States, and then moving back to the East Coast, I have been working to combine elements from my previous bodies of work, and focus on the feeling of the light and air moving through the branches of trees. My newest body of work, Out My Window, explores the trees that I grew up alongside and saw outside my childhood bedroom window on a daily basis. In these pieces, I am attempting to get at the memory and experience of the changing light as days and seasons passed. 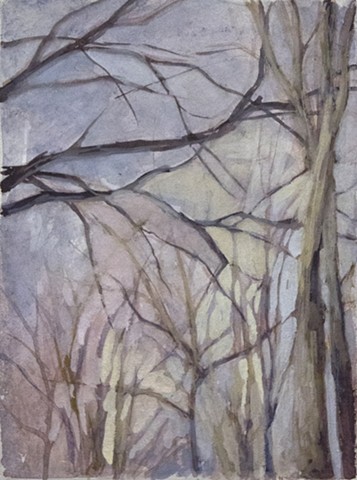